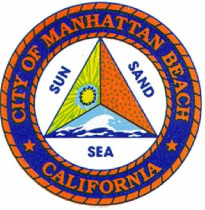 The history of Manhattan Beach covers a relatively short span. In its early days, Manhattan Beach was part of the ten-mile ocean frontage of Rancho Sausal Redondo, which means "Round Clump of Willows." At one time the area was called "Shore Acres" by George Peck, who owned a section of the north end of town.

The first downtown building was built around 1901, a small frame building later used for city offices. The official date of incorporation was December 2, 1912. Planks were laid in the sand on Manhattan Avenue for vehicles and along the Strand and side streets for pedestrians.

Two wooden piers were built in 1901, one at Center Street and one at Marine Avenue.  The next pier was built on the same site and extended about 922 feet into the ocean.

After 1945 a large influx of people came as a result of the desirability of the area for year-round living. Servicemen visiting during the war returned to live here. The development of the defense industry brought many people to the South Bay to reside and work. Much of the land east of Sepulveda was developed to house the influx of people