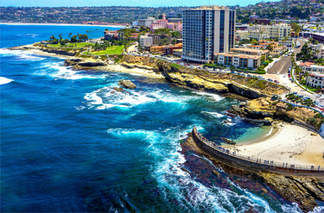 La Jolla in Spanish means "The Jewel", and with some of Southern California's most beautiful coastline, La Jolla is considered by many to be the jewel of America's Finest City. Located 12 miles north of Downtown, La Jolla is defined by rugged ocean bluffs, steep canyons and hillsides culminating at Mount Soledad. Since the 1880's, La Jolla has been a favorite vacation destination because of its exceptional weather and wide variety of hotels, shopping, dining, events and attractions. Due to its importance as a visitor destination, La Jolla has been designated as a .special community. of regional and state-wide significance by the California Coastal Act.


This community of about 32,000 residents across 5,700 acres retains its own small-town character and civic pride while remaining a part of the City of San Diego. La Jolla is home to the Scripps Institution of Oceanography, the Stephen Birch Aquarium, University of California, San Diego, and the San Diego Museum of Contemporary Art.